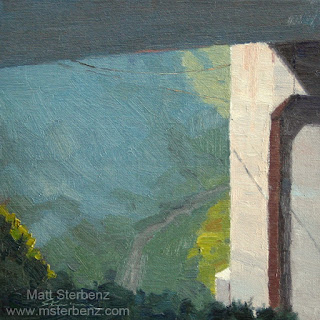 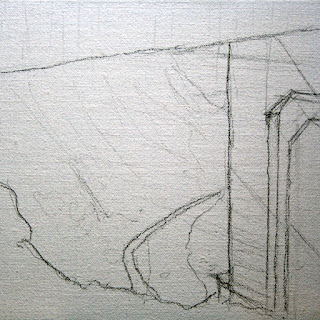 First I started out with a quick graphite line drawing, paying close attention to perspective and composition. 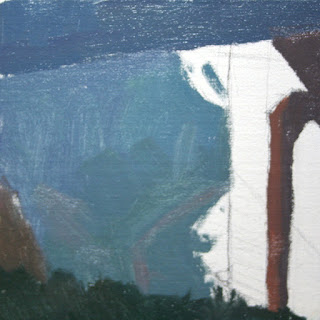 The shadows were thinly blocked in. I like to think of everything as shapes, and they are either in the light or in the shadow. This is a useful tool for creating a composition. 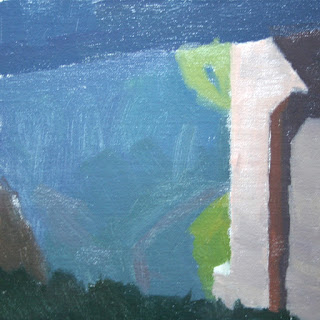 Lights are blocked in now. Paint is still kept relatively thin. I'm not too concerned with subtleties at this stage; just a general idea of the local color. Value is more important than accurate color at this stage. 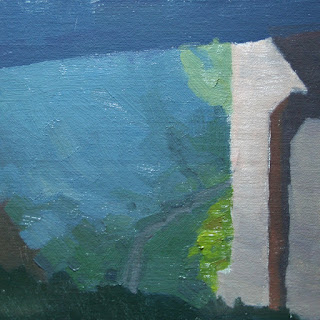 Once lights and shadows have been blocked in, I can judge the painting as a whole. Now is when paint starts to get thicker and subtleties and color adjustments can happen. I tend to start with the background and work my way forward. In this case, I'm working on the hazy ground down below. 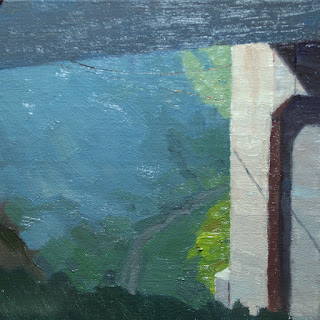 Light areas are getting some attention now. To simplify the bricks on the bridge, I used a flat brush and painted in the direction of the vanishing point. This helped convey accurate perspective. I used a mahl stick as a guide to help draw straight lines for the support cable cast shadows. Highlights to the cables were added with a palette knife and a warm red-orange. I added a further bit of a highlight by scratching with a toothpick. 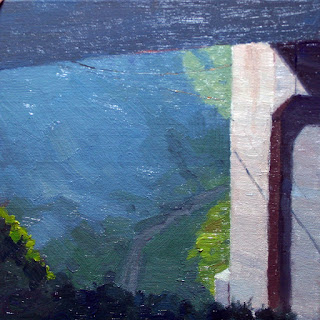 Darkest areas were then added in the foreground, followed by a bright green highlight. This helps balance the composition. Without that highlight, all the light areas exist only on the right side of the painting. I decided to simplify the foreground by eliminating the dirt area and making everything a dark green.

Posted by Matt Sterbenz at 8:35 PM