It's been a while since I have posted on here. Fortunately I have been painting the whole time.

Back in April I went to the Plein Air painting convention in Monterey. It was worth every penny. I made a road trip out of it, learned a ton, and did some painting on the coast. After the convention I drove up to San Francisco to check out Academy of Art University (Big mistake, they were extremely rude and unwelcoming), and on the way back to Phoenix I swung by Pasadena on a whim to check out Art Center College of Design. They were awesome, gave me a tour, plenty of pamphlets, and answered all of my questions. That's the way a school should be run (Take note, Academy of Art)

Anyway, about the convention. I got to meet James Gurney, which was really great. He signed both of my copies of "Color and Light" and "Imaginative Realism". Such a great person. All of the presenters were very good, some more outstanding than others. Scott Christensen, Ken Auster, Gil Dellinger, and Ray Roberts were among my favorites.

Here's a few of the paintings I did during/after the convention. They're all 9x12 on homemade linen panels (I'll be doing a tutorial on making panels at some point in the future). 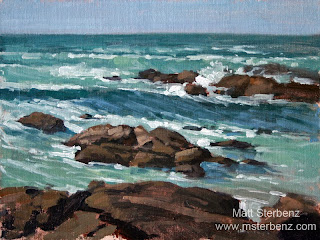 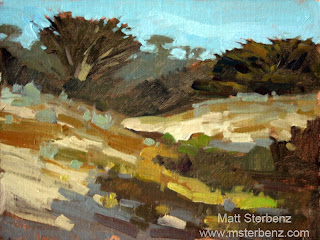 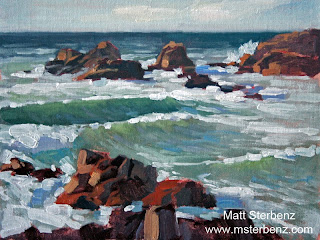 I went on a hiking trip to the pines in northern Arizona last month (Strawberry, Pine, and a hike down to the waterfall in Fossil Creek), and came back with another half-dozen paintings. 9x12 oil-primed linen panels again, with the exception of the sunset which is 6x8. 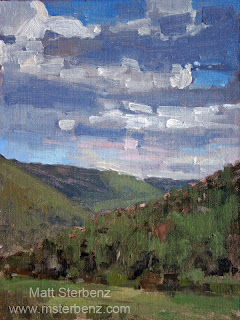 This was my first painting up in Strawberry. I'm not used to painting so much green, so this was a good lesson in forcing myself to keep greens muted. It's much easier to brighten up a green than to dull it down! 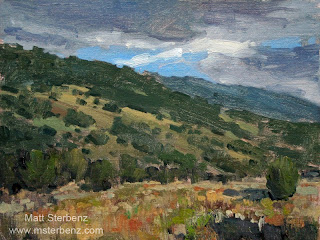 There were scattered clouds, and I liked the way the sun would break through on this hill. 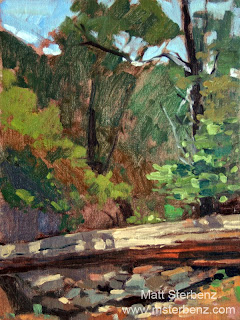 A quick study about a mile in a hiking trail in Pine, AZ. I liked the way the warm reflected light hit that log. I had to cut this painting short because a big thunderstorm was rolling in, and we needed to get back to the car in time. 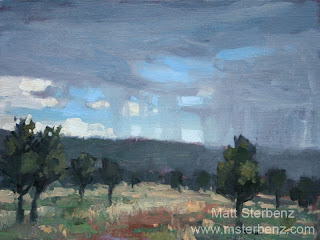 Got back to the bed and breakfast shortly after painting the log. This one was my first time actually painting in a storm. The summer monsoons in Arizona are something else. 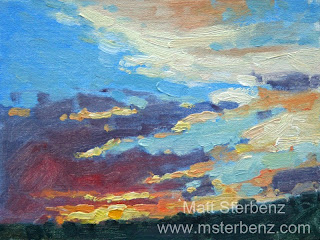 Later that evening we got a really nice sunset. This one was a race against the clock, but I think I got a decent painting out of it. 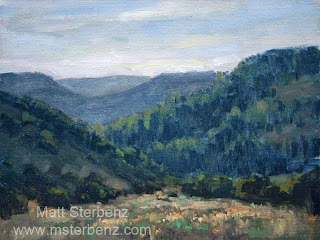 This was painted during my last morning there. I toned the panel with a slightly yellow grey, to capture the golden morning light. I don't like the composition of this piece.

That's it for now. More to come!


Posted by Matt Sterbenz at 6:31 PM No comments: