I stretch my own canvases for a couple reasons. It's cheaper, which is great. But generally it is higher quality than the pre-stretched canvases too. I also hate how some store-bought canvases put staples on the side of the canvas. It looks terrible. I can also put as much, or as little, gesso as I want. Anyway, I can be a little obsessive about how my canvases are stretched. I figured I would share my process.

Materials:
-Staple Gun (mine is an Arrow brand, model JT-21M, and JT-21 8mm staples)
-Cotton duct canvas (Fabric stores sell it pretty cheap, tent/awning manufacturers will sometimes give away scraps. If you are looking for a real bargain pick up some canvas "painter's drop cloth". Home Depot sells 12 foot wide ones for about $15. It's not good quality, but it works great for studies and stuff once it is primed. Art stores have the best kind but they will charge you a lot more for it).
-Stretcher bars (I like to get the thicker bars. If the bars are too thin, sometimes the canvas can warp once it is stretched. Thicker bars don't have that problem, and as a bonus you can get away without framing your painting by painting the edges)
-Scissors

Some people like to use some kind of canvas-stretching pliers. I find that I can stretch it tight enough with just my fingers. Any creases left in the canvas will go away once you paint the gesso on (gesso shrinks when it dries). The canvas will be as tight as a drum if you do it right, so I don't really see the need for any extra tools.

Here is a set of stretcher bars. I believe it is Utrecht brand. I decided I wanted to re-stretch the canvas so I removed the old painting and the staples. The stretcher bars are upside down on a piece of canvas, and the canvas was cut so that there is about 3 inches extra all the way around. Try to center the bars as evenly as possible. 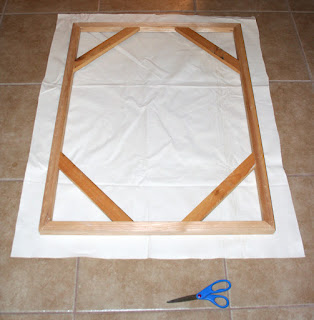 Beginning in the middle of one of the sides, I pull the canvas up and staple it down to the back of the bar. I like to fold the edge under itself, because it hides the frayed edges and it looks a lot cleaner. 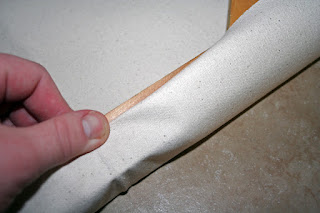 Staple the center part of the opposite side next. Then the 2 remaining sides. 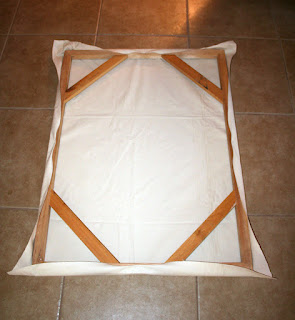 Now, pulling tight and folding the canvas edge over as I go, I put one staple on either side of the middle one. Then I work from the center of the edge opposite of that. I'll work my way around the canvas putting in two staples at a time on each edge. This helps keep the stretching even, rather than putting a ton of staples in one side before starting the others. 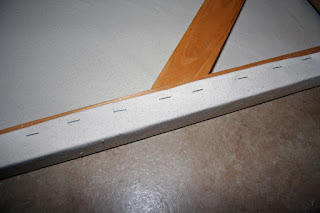 I keep my staples about 1 inch apart. Though it wouldn't hurt to put more in. 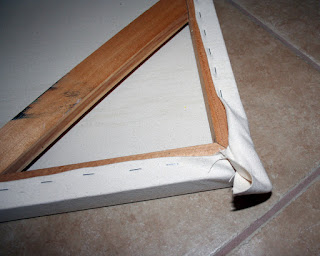 Finally we work our way over to the corners. I stop stapling about 3 inches away from each corner, in order to give me enough slack to fold it over. 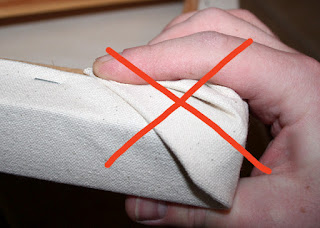 Don't fold it this way. Some people fold their corners this way and it looks really tacky. If you put a little bit more effort into how you fold your corners it will make a huge difference. Especially if you aren't framing your paintings. 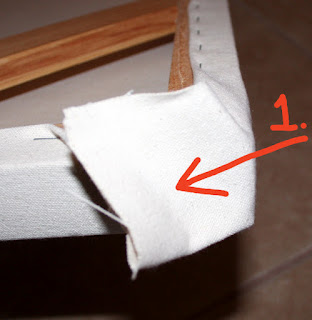 This way of folding takes some time to perfect but it is really worth it. Try to keep everything very tight. Pull the edge down and to the left (1). 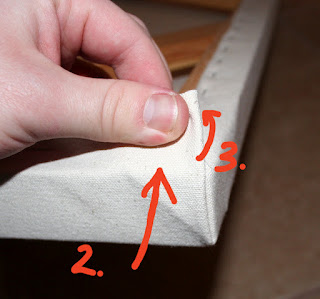 Then pull it upwards (2). Try to keep the other edge (on this image's right side) pulled in tight. Sometimes it can get a little loose when doing the second step. Finally fold it down flat onto the back of the stretchers (3). Then staple it down. 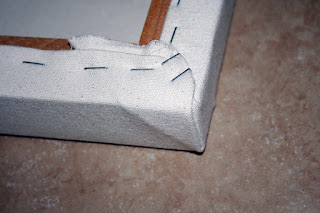 Then I prime them with 3-4 coats of gesso followed by a light rub of sandpaper. Make sure to gesso the edges too.

Posted by Matt Sterbenz at 1:51 PM