The Pacific Northwest Plein Air event has come and gone, and what a great time it was. The Columbia River Gorge was breathtaking. A little late for the post, but better late than never. Here is a little write-up of my painting trip. (As I write this, the Eagle Creek fire is burning up a lot of the areas I painted. Hopefully the fire will die down soon. It's such a beautiful area.)

Friday, July 30th my wife and I set out from Phoenix. We decided to camp along the way, and day one we made it to Zion National Park in Utah. We camped just outside of Zion. Here's the first painting - a quick little 6x6 from the camp site, with beer and citronella candle to keep me company. 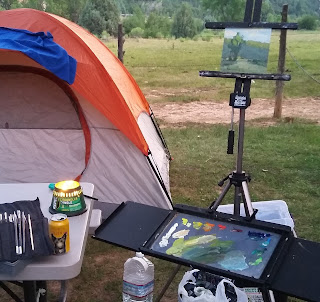 Saturday morning we headed north to Idaho. After a day of driving we got to Lake Walcott State Park, about an hour or two east of Boise. I was able to get in an 8x10 before the sun went down. The Snake River had some nice falls, and they were pretty loud too. 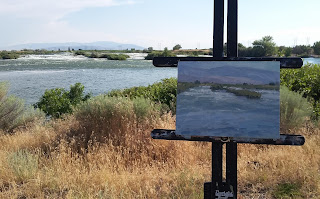 Sunday we were able to make it to the Gorge. We camped at Maryhill State Park, just a couple miles away from the Maryhill Museum - the event host. This is the view looking west from the Washington side of the river. You can see Mt. Hood in the background - a feature we would soon miss! But more on that later... 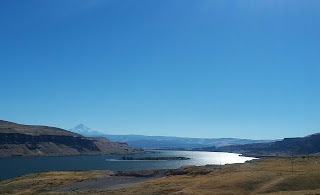 Monday morning was orientation at a coffee shop in Hood River. Once everyone was on the same page about the week's activities, everyone went off to paint. I joined a few other artists up on top of Mt. Hood. The area was experiencing some record-breaking heat (well into the 100's down below) but it was really nice at the high elevations. 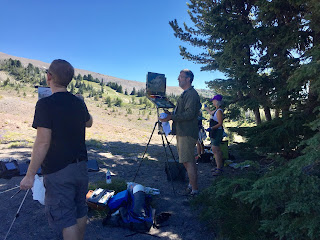 I worked up this 8x10 from the shade of a tree, just above Timberline Lodge. What a great view. 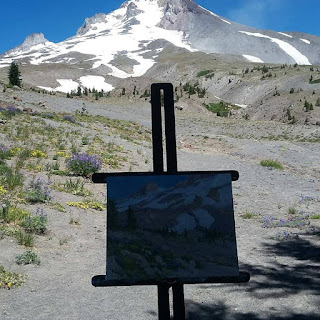 Tuesday, August 1 we met for a day of painting at Griffin House in Hood River. It's a great little venue for weddings and other events, and the owner, Claire, was a wonderful host. It was another very hot day, but cool enough in the shade.

My first painting of the day was this 9x12 looking west. This was morning light and the sun was almost behind me, so there weren't too many shadow shapes. I normally like composing my paintings with lots of strong shadow shapes, so this was a good challenge. 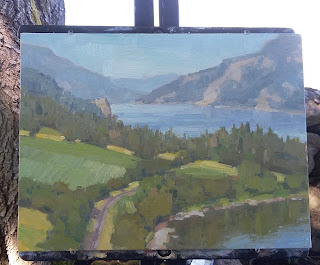 I liked that first challenge so much I decided to paint it again. This time it was an 8x10. The shadow shapes were stronger in the afternoon light, but the colors were much more flat. 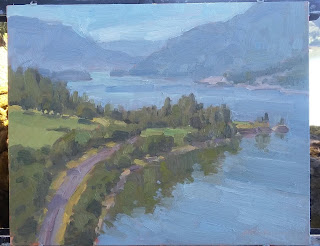 Wednesday morning I wanted to paint a large panorama from up near the Stonehenge War Memorial in Maryhill. I was looking forward to a view with Mt. Hood in the background, but... nope. A ton of smoke moved in from wildfires up in Canada. There was so much smoke in the air, the sun came up a bright cadmium red. I could look at it without squinting. So much for that view of Mt Hood!

I decided to focus on the farms and buildings in Maryhill, and moved the horizon up towards the top of the 16x20 canvas. This was my progress after the first session: 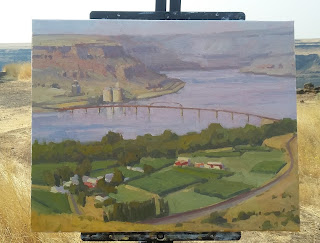 I went back to the same spot on Thursday morning, hoping that the smoke would have lifted so I could paint the background. Nope! The smoke was even worse that the day before. Oh well, that's what happens when you paint from life. Not to be discouraged, I painted what I saw. I brought in some more crimson notes into the water and background, to capture the feeling of that blood-red sunrise.

I forgot to take a progress picture of the second session's progress. Whoops.

Wednesday afternoon was spent at Tanner Creek (also called Wahclella Falls). Big thanks to Thomas Kitts for showing me this painting spot. After hiking about a mile in, there is a bridge with access to the water. With tall cliffs above on either side, and huge trees giving plenty of shade, this area was the perfect spot to escape the heat wave. I worked up this 9x12. 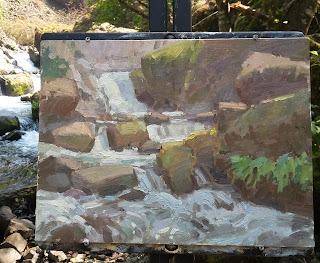 Since the cliffs are so tall, you only have a small window of light to paint from. It gets shady in the canyon pretty quickly. My wife and I left after finishing this painting, and we went looking at some of the huge waterfalls along historic State Route 30.

Thursday was a half-day. Paintings had to be turned in later that day, so I only had a small amount of time to do another painting. After touching up the 16x20 in Maryhill at sunrise, we drove west to Hood River (about 30 minutes from our campsite in Maryhill), and pulled off at one of the Oregon state park swimming sites.

The smoke was even worse. We could barely see across the river. So I decided to do an atmospheric, 16x8 vertical piece. I think that is some sort of fishing platform in the foreground. Some people came to swim and a couple of them thought it was a good idea to jump from the top of those rocks. No, thanks. 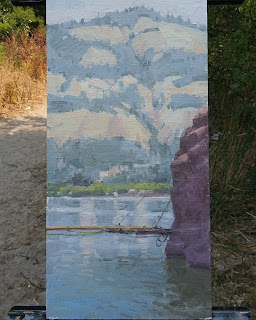 With that painting wrapped up, we booked it back to camp where I framed everything. 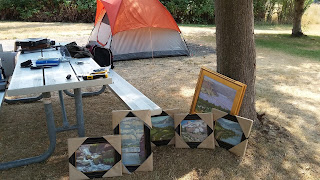 The next day, Friday, was the opening reception. There were tons of great paintings. Our judge, Mike Hernandez, really had his work cut out for him.

I was really happy to have received a ribbon for my large piece. I received the National Scenic Area Award. It was a great way to cap off a really fun trip. 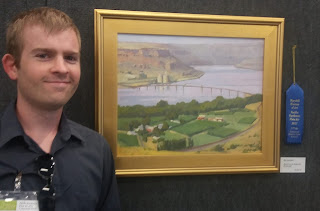 Plein Air Magazine did a great write-up of the event. You can take a look at all the other winners here: http://www.outdoorpainter.com/an-area-worth-painting/
Posted by Matt Sterbenz at 8:43 PM